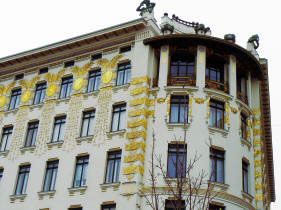 A market has been operating in near this location since at least 1780s when it was a dairy farmer's market for the trading of milk and other dairy products.

Originally it was named Kärntnertormarkt which was because of the bridge which was at that time called Kärntnertorbrücke, but is now Elisabethbrücke, later it spread along to reach Karlsplatz to the the area now beside the Vienna University of Technology.

Later this market was the officially fruit and vegetable market for imported goods not arriving along the Donaukanal ("Danube Canal").

When the cities second river was roofed over more than 100 years ago it was on the long wide plaza created by this that the market which we now know was formed.

It was not until 1905 that the current name became official with in 1910 more than 100 stalls being built of a standard design along the street.  In the 1980s the market was modernized but many of the traditional buildings were kept.

Today it is located in the 6th Viennese district called Mariahilf but geographically it straddles the border between the 4th and 6th districts but to ease management the border was moved to allow the whole market to be in Mariahilf!

Originally a fresh produce market the Naschmarkt today is a key open dining area. So whether you want to sit, eat, and people-watch, or buy ready-made dishes to take away, or fresh produce to create your own culinary masterpieces this is the place to visit